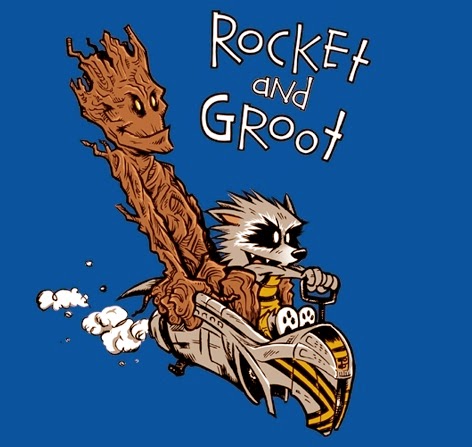 On Monday, March 24, Teefury will be running a "Rocket & Groot" tee - a Guardians of the Galaxy/Calvin & Hobbes parody. The shirt is a collaboration by myself and HULK superfan Steve Yarish.

Steve is best known for his incredible fandom of the Hulk. He is such a big fan, that Marvel writers and artists named a recurring character after him in the comics. Steve also has a bar from one of the Hulk movies named after him. You can get some background on Steve Yarish in this episode of Fanatical:

Steve approached me with the idea for Teefury's March Collaboration Challenge. Being a huge fan of Hulk, comics, and Calvin and Hobbes, I whipped up the design in a few short days.

Starting at Midnight EST, Monday, March 24, go to www.teefury.com to get the shirt for just $11. But after that day, it's gone, gone, gone!
Posted by Jeffro at 4:42 PM

Hello Jeffro. Will this shirt ever be sold again?