I know it's been a little while since I posted. I have been busy doing stuff for Christmas. Some presents, some business. Some that wound up becoming both. But since a lot of my work runs that line, I wanted to showcase it here. First, below are the shirts I worked on during the Christmas season.

The first was a gift for Joannie’s youngest son Aaron. We both love the television show “The Wire”. Aaron is a smart kid who seems to get just how intelligent and important that show is. Joannie got me the complete boxed set last year for Valentine’s Day. Since I’d scratched up and lent out all my burned copies of the series, this was just about the greatest gift anyone ever gave me. It was even more awesome that Aaron also loved the show. Last year, as I would drive him to school in the morning, it’s pretty much all we would talk about. Since we hadn’t spent much time together before this, we didn’t really know each other well. But I remember being genuinely impressed by how smart and insightful he is. When he told me he wanted an “Omar Comin” black hoodie for Christmas, I got to work. Brian Potash over at DevilFish Ink did the printing for me, and took great personal care, even hand-painting some of the ink over the hoodie’s front pocket. Potash also took it upon himself to make a certificate of authenticity, letting Aaron know this shirt was one-of-a-kind. I knew I went to the right guy for the printing. Brian takes great pride in his work, and always takes the time to add a personal touch.

The shirt below is my Boardwalk Empire-inspired shirt for Teefury. I also love this show (although nothing really compares to the Wire). However, I still love all the old-tymieness. I was happy the shirt did pretty well on the Teefury sale and it still sells pretty well on my RedBubble site. I was even happier to see that my friend Andrea bought it for John, my future Father-In-Law as a Christmas gift. That was a pleasant surprise to see John wearing the shirt at Joannie’s folks’ Christmas party. 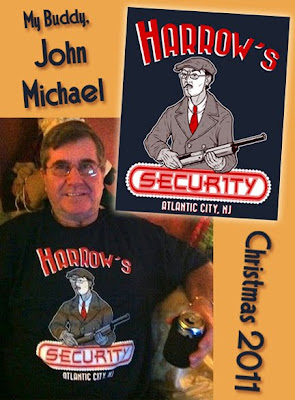 The shirt below I designed in tribute Ernie Koschineg, a hero to anyone who attended North Catholic during the past few generations. It’s hard to explain, but Ernie, as tough as he is, was the reason kids couldn’t cut class. He was North’s disciplinarian. All the students thought he was a fed, and he scared them to death. Yet at the end of every school year, Ernie would give a smile and a fist pump on the last day that would make the auditorium erupt with applause. After the school closed, instead of retiring, Ernie took it upon himself to work as a liaison to the schools that North kids transferred to. He rotates his schedule between all these other schools to make sure our students adjust well to their new surroundings. He acts so tough, but he cares for each kid more than they will ever know. I wanted to make a shirt that poked fun at Ernie’s legendary J.U.G. (Justice Under God), which is Catholic school’s detention. I tried to emulate the spirit of old Communist Propaganda posters. I also included a scan of a detention slip. Ernie was a good sport and gave his blessing for the design. He was most gracious when I delivered his shirt to him at Roman, and he actually wore it to the teachers’ reunion we had after Christmas. The shirt is still for sale at the Spirit Newspaper Offices at 1428 E. Susquehanna Avenue in Fishtown. If you want one, you can call: (215) 423-6246.

I will post more of the work I have been doing soon...
Posted by Jeffro at 10:15 AM No comments: 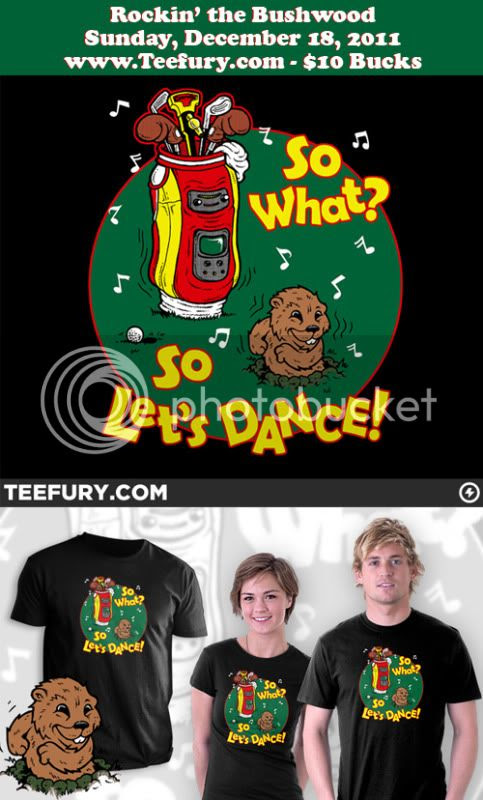 This shirt design was inspired by my favorite scene in one of my favorite comedies of all time - Caddyshack. This is as close as I get to a golf course. I'm not a huge fan of golf, but I LOVE this movie. CLICK HERE to see the clip.

On Sunday, December 18, from midnight to midnight, the shirt can be purchased on Teefury.com. Click HERE to visit the site.
Posted by Jeffro at 6:24 PM No comments:

I have a holiday themed design up in my RedBubble store. If interested, you can get this design in various colors on tees, hoodies and baby clothes. Click Here to go to my RedBubble Store.

Posted by Jeffro at 9:28 AM No comments:

Harrow's Security Shirt up on Teefury - Dec. 5 Only 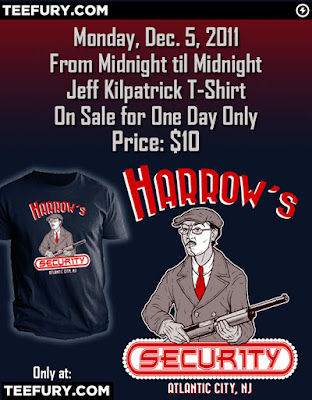 I am a big fan of old-tymie things. I was really happy last year when I saw HBO had a show coming out about Atlantic City in the 1920's. The show has so many things I like. Scorsese is involved Buscemi is the lead. Who doesn't love that guy?. Plus all the sets, cars, suits, characters, music - this show is full of awesome stuff from my grandparents' heyday, when I would have preferred to live.

The one thing that really surprised me though was Richard Harrow's character. This lonely Phantom of the Opera/Slingblade type war hero took me by surprise and has turned out to be my favorite character in the show. He's that rogue, badass guy, kind of like Rorschach in Watchmen. I find these types of characters really interesting, and feel like they take stories in unexpected directions. Anyways, that's the inspiration behind this shirt design. I used old fashioned text, art-deco 1920's stuff. My buddy Mark suggested the light bulbs around the bottom text, like a marquee. I thought that was a nice touch.

Anyways, the shirt is for sale one day only, December 5, for $10 bucks on Teefury.com.
Posted by Jeffro at 7:07 AM No comments: