Variations on a Theme: Wampa

I have fond memories of Star Wars, but I don't think I get as nostalgic as most kids from my generation. Some folks turn simple entertainment from their youth into religion. I don't think those movies were created with that intention. I think they were just made to be fun adventures. To be honest, I loved playing with my Star Wars toys more than watching the movies. Sometimes I feel like my adventures were cooler, and they had less politics.

Thinking back though, I really only liked certain scenes in the movies - the scenes with the monsters. I remember being extremely bored with all the space ship fighting and politics. Chewbacca was always cool, but I remember being bored during the first movie once the bar scene was over. To be fair, that scene in the cantina was an influence that still weaves its way into my work. I also loved Jabba the Hutt's court in the third movie, then got bored when that scene was over. In the Empire Strikes Back, I have to say that the star of that film was the Wampa monster, at least for me. He was an awesome monster. Anyways, here are a couple Wampa illustrations I did recently: 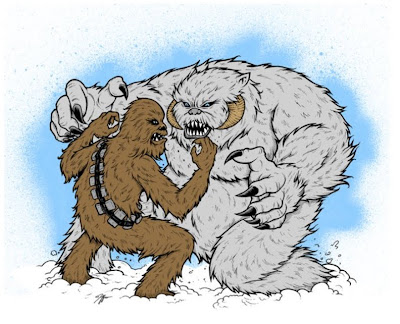 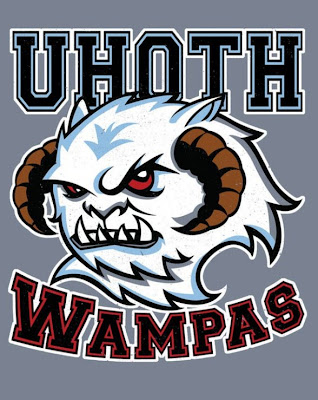 Also - as far as I am concerned, the new Star Wars movies were an awful waste of time and money. No one needed to see those movies.
Posted by Jeffro at 6:28 AM No comments: 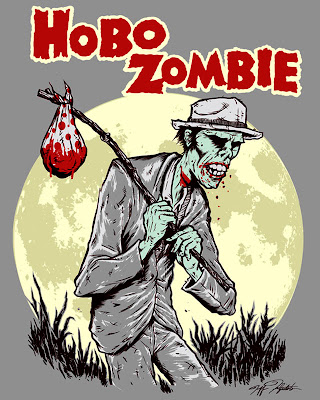 With the PCS Hobo Day fast approaching, I figured I would put this one up today.

In 2008, I started meeting weekly with Roger Petersen and Mitchell Landsman to make plans for an ongoing anthology comic. Rog is a comics natural, a genius. And he is always trying to convince me to make more comics instead of static illustrations. We each had to pick a different classic comics genre. Rog picked Crime. Mitchell picked science fiction. I hate most superheroes (except the monstery ones like the Hulk and Thing or awesome villains like The Mandrill or Solomon Grundy). To be honest, I'd rather draw an ongoing romance or war comic than a superhero story. I was pretty stressed out. I thought, "If I had to draw something over and over again, it's got to be something I actually want to draw." I like monsters, so I picked the horror genre. But I was still up in the air about exactly what story I'd want to tell.

Over the next few weeks, I came up with an idea for a hobo zombie story set during the great depression. I love old EC Horror comics and other monster comics from the 60's and 70's. I love Hobos, and I have always been interested in the Great Depression and the conflicts people were faced with at that time. I called the zombie "Dead Legs". First I called him Leggsy after an uncle of mine that passed on a few years back. Leggsy was a tough as nails icon in my neighborhood. But my cousin convinced me not to, and said some would consider it a sign of disrespect. So right now, the project's working title is "Dead Legs".

The outline of the story went through several drafts. Over that year, Rog, Mitchell, and I got very busy and the anthology plans just slipped away. But the idea stuck with me. I had a beginning, an end, and a format that could give the story some legs (no pun intended). The basic concept is this: The zombie starts most stories getting off a train, traveling into a new town. He doesn't know who he is, although he is trying to find out. He has a few remnants of his past life in his bindle, and he is haunted by flashing memories of when he was alive - clues that push him along his journey. He's more of a voodoo zombie than a George Romero zombie (he's not contagious). At the end of each story, after some chaos and horror erupts, he's got to flee and get on to the next town. I did a lot of research on Marvel's "Tales of the Zombie" so I didn't indirectly rip those stories off too much. I also have an "Ahab" type character - a railroad bull who the zombie wrongs early in the story. This character is loosely based on Ernest Borgnine's "Shack" character from the hobo classic "Emperor of the North Pole". Anyhow, I guess it's inspired by my favorite influences in art and culture (monsters, hobos, old-tyminess), but also by some of my favorite entertainment as a kid (The Fugitive and Incredible Hulk teevee shows).

I tinker with the story from time to time. I keep a separate sketchbook for it. It's just tough to invest myself in any long-term project right now with several jobs. The reason I posted this long story is because I have been doing a bunch of "money-chasing" projects lately. I needed to remind myself that I still need to make time for the work I want to make - something that I would enjoy sitting at the table to do. Something fun that is a culmination of my own taste and influences, however off the rails they may be.
Posted by Jeffro at 12:27 AM 2 comments:

Here is a drawing I did to advertise the Philadelphia Cartoonist Society's upcoming "Hobo Day" event in June.

The original drawing was done in my sketchbook in pen and ink. I scanned it and re-worked it in Photoshop, changing the ink lines to a dark brown to give it a more rustic, old-timey feel. I also had to do a live trace on the sign logos in Illustrator before placing them into the Photoshop document. The hand-drawn logos in the original drawing were just too shaky.

The digital color palette was inspired by a book I was thumbing through called "The Designer's Guide to Global Color Combinations" by Leslie Cabarga. The book is really interesting, because it talks about how different color combinations evoke a different aesthetic response depending on the region or country. It breaks down by chapter what parts of the world use these color combinations in advertising and art. It even gives a bit of history on why these colors work well in different parts of the world. The book also gives the RGB and CMYK number values you can use to get these exact colors when using programs like Photoshop and Illustrator.

I didn't delve much into the meaning behind the color palette I chose. I just picked colors that seemed to fit my drawing. Still in all, the book is really cool and full of a lot of interesting information. Plus the writer has a great sense of humor.

Posted by Jeffro at 6:59 AM No comments: