Sadly, I never got to know Wayne Elliss. From what all of his friends tell me, he was a great guy. I can tell when I talk to his best friend Wally that there losing Wayne was a huge loss to many people in Fishtown. So when Wally asked me to design this year's t-shirt for Wayne's Memorial Horseshoe Tournament, I was more than happy to oblige. 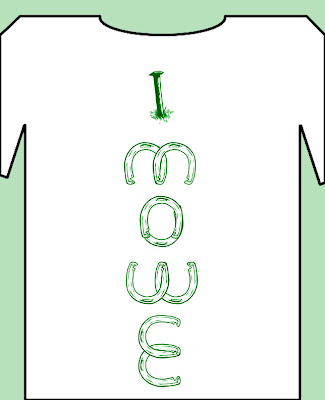 Wally had a very clear vision of what he wanted, very simple and direct. I've drawn a lot of t-shirt designs in my life, but I think this one may be my favorite because of its purpose and clarity. It's not often I work quick and simple, and do it for a good cause. I have to say that Wally is one of the better art directors I've worked with. And here I thought he was just my bartender.

The Wayne Elliss Memorial Horseshoe Tournament will be happening this Saturday, July 31 at 11 AM at Shissler Recreation Center. I believe the cost of entry is $20 a person or $40 a team. Food, beer, and good times will be provided. Folks should come out and support this unique memorial event. All proceeds go to Wayne's family's fund for a reward to help catch his killer.
Posted by Jeffro at 5:59 AM 1 comment:

Harvey Pekar's work was very important to me. The guy reached so many people with his comics. He had so many different artists draw his stories. I don't claim to know him, but it seemed to me that he never seemed to compromise his vision. He also seemed to keep his work blue collar, speaking in an everyman's voice. It's that kind of voice that has inspired me time and time again not to make art only for money, that there has to be a bigger reason. There has to be something personal connected to it.

Aside from my drawing work, I've always worked at least one day job to pay my bills. I figure if I can earn a living working nine to five, I can make the art I want to make and still keep that want to draw. There have been times in the past where I've taken big jobs that didn't quite fit in with what I wanted to say with my work. The end result was that even though I had a nice paycheck, my drive to draw was diminished. Then I thought that maybe I wasn't cut out to make art for a living. I started to feel bad, that I was too stubborn. I thought that maybe this would always hold me back and haunt me my whole life. But I liked where I came from, and I liked drawing about places like that. I liked drawing about working class people, city streets, corner bars, stickball games, abused kids, and dock workers even if there will never be a huge market for it.

After reading Harvey Pekar's work, I started not to feel so bad. Here is a man who said, "Ordinary life is pretty complex stuff." He was right. Pekar reached millions of people writing about himself being an ordinary person. They made a movie about his life to celebrate his work, and he kept his dayjob until retirement. Harvey Pekar gave me faith in comics. His work convinced me that it's worth putting my work out there. It may only find a small audience, but it's still worth it if people gravitate towards it and connect with it. All art is about communication. That's the base reason anyone makes any art. Pekar's work was a huge catalyst behind the "Sketches of Fishtown" project, to show the inner working of one small neighborhood.

I met Harvey a few times at comic conventions. I even saw him lecture once at the Free Library of Philadelphia about the impact of comics. I did a sketch of him while he was speaking. He was nice enough to autograph it for me after the speech, even though I don't think he liked the way I drew him. I gave the drawing to Christian Patchell as a gift. Harvey is a hero to Patch. Patch said that Pekar's "Our Cancer Year" was a really huge inspiration to the book he is working on now about making art and living with cancer. Harvey Pekar had a great impact on a great many people. 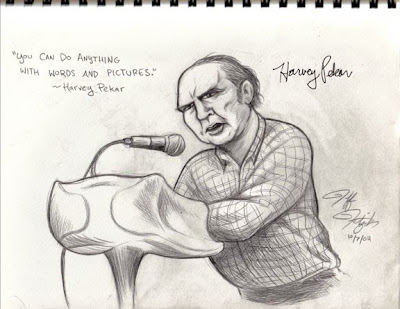 I'm glad there are people like Harvey Pekar in the world. Even though he didn't know me, his voice kicked me in the ass keep chugging away at my own work. I'm grateful for that, and I'm really sorry he's gone.
Posted by Jeffro at 8:53 AM 2 comments:

Pabst Blue Ribbon has always been good to me. I think I have stated on this blog several times that I like how they do business. Instead of putting a commercial on during the Superbowl, they handle most of their advertising in a sort of grass roots style, through art openings and independent rock shows. I think the biggest marketing campaign I've seen them tackle in recent years are the billboards, and even those are pieces of art from lesser known working artists. I'm much more comfortable with capitalism when it's handled man to man. I know it's still capitalism, and it serves and meets the same end. But Pabst is a company that has always had a face and name accountable when I've dealt with them. Plus they always donate free beer to my art openings and book releases. For that I'm very grateful. 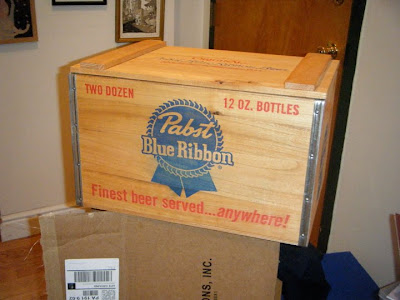 So when the local rep, Gravy, asked me to make a piece based on one of these old tymie crates, I happily said yes. With the school shutting down, I'm getting to it later than I wanted. But I didn't want to do a rush job on it, especially since Pabst has been so generous to me over the years. 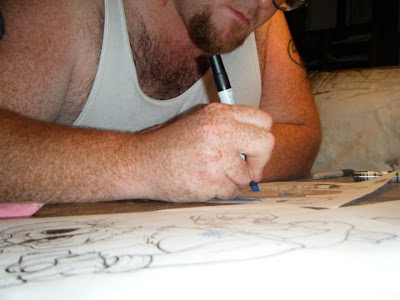 I decided to do the blog covering this project in stages because it's kind of a large project. I am doing all of the art on sticker paper, using Micron pens and Prismacolor and Chartpak markers (mainly because they use waterproof ink). The sticker paper reacts nicely to these tools. You don't get the bleed you usually get with the markers. I assume it has something to do with the adhesive on the back of the sticker paper catching the marker ink. 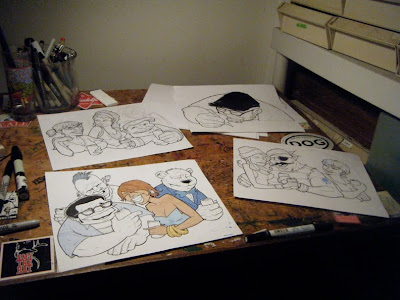 I am going to draw myself drawing a lot of happy folks drinking PBR from all walks of life. This is all I have so far, but I will update the blog with more photos as I progress... 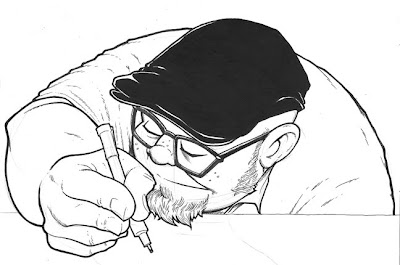 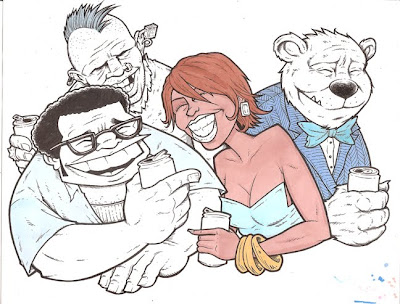 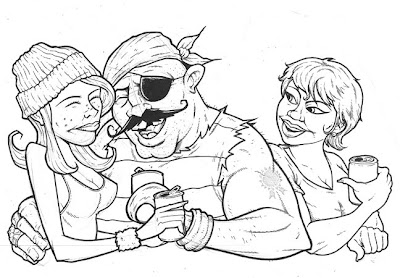 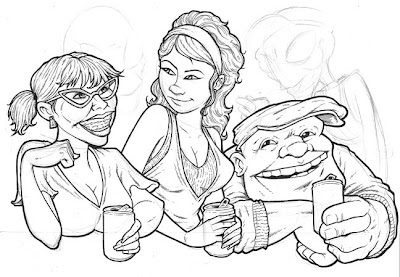 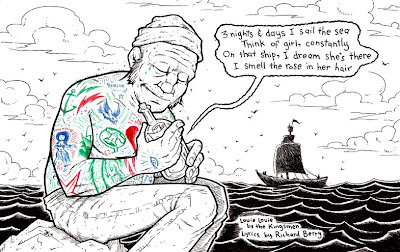 My buddy Anthony Pedro curated this group show through the Autumn Society of Philadelphia. It's entitled "All Hands on Deck", and each piece of art is themed around the ocean and seafaring. The show will hang at Chapterhouse Cafe & Gallery on 620 South 9th Street in Philly. I drew this piece in different colored inks on bristol board. When I first started it, I originally intended all the tattoos to be green and have the referenced song be an Irish seafaring song. There are so many I love by the Clancy Brothers and the Pogues. But I was at the diner with my niece Erin when I finished it around the 4th of July. For some reason, she made me want to make the drawing more colorful. So I referenced "Louie Louie". It's a fun sea song. Erin gave me the ideas for most of the tattoos on the sailor. She's a very promising artist herself. I was glad to have her input. I think it kept the drawing more whimsical.
Posted by Jeffro at 9:01 AM No comments:

I got a flat file recently to store some of my larger papers, unframed art, posters, etc. I was really glad to get it, but anyone who has a flat file knows it takes up a nice chunk of room space. And anyone who's ever hung out at my place knows I don't have much space to deal with.

So I was loading up the flat file this morning, and I have it stacked above a heavy cabinet and below my sketchbook shelf. And like a game of Jenga, the whole thing almost comes toppling down. Not the most sound architectural arrangement I guess.

In a panic, I started going through my drawers and files to see what can stay and what can go. I came across a lot of art I really have no need for. Given that next year I will be moving out of this apartment to greener pastures, I want to try my best to get rid of as much as possible.

So if anyone would like to stop by and go through some folders of artwork, I'll be getting rid of it really really cheap. There's no reason to drag all this stuff with me through life. If you're interested, please just e-mail me: phillytoon@yahoo.com. There are folders and envelopes full of this stuff. Here are a few of the pieces: 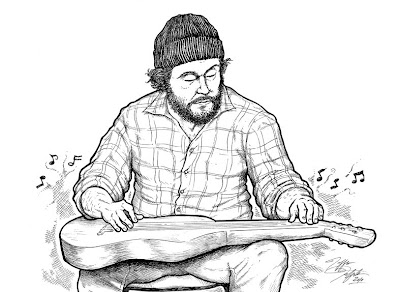 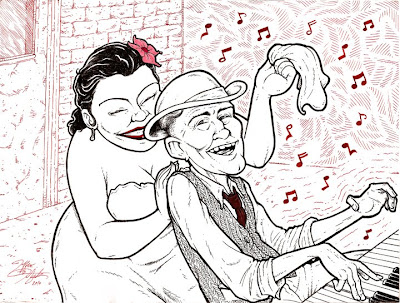 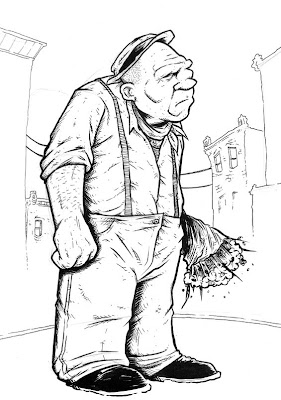 Posted by Jeffro at 7:27 AM No comments: