Sketchin' at the River

Past few months have been kind of crazy between several jobs, freelance work, and family stuff. Sometimes life requires that drawing has to take a back seat to other responsibilities. It's cool though, because everything in life ebbs and flows. It's just the way it is.
So a couple Sundays ago, I found myself awake super early to run an errand. I could have went back to bed, because I had a couple hours to kill before running more errands that would last all day. 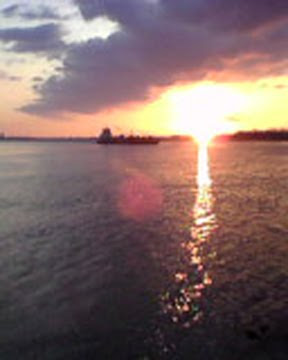 Instead I decided to take a moment for myself, so I grabbed a coffee at sunrise and went over to the old Greenberg piers on the Delaware River in my neighborhood. The tide was pretty high, but it looked like it was going out. 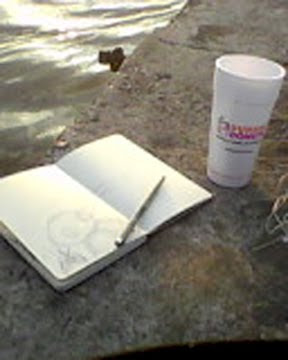 I sat at the edge of the pier listening to my Ipod, sketching away, and this is what came out on a two-page spread in the sketchbook: 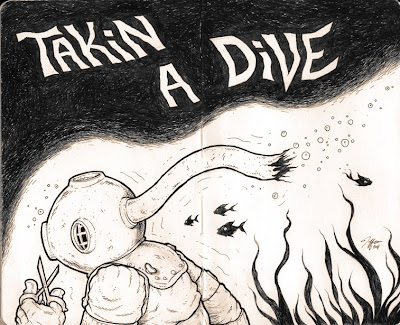 I really like drawing old tymie deep sea divers for some reason. This guy is escaping. The words came from an E.L.O. song on my Ipod (at least that's what the lyrics sound like to me). Because I was tired, lost in the drawing and my Ipod was so loud, I didn't notice that the murky green water of the Dirty Del was rising to the edge of the pier. A tugboat cruised by on the channel and gave way to a residual wave that splashed over the edge of the pier, spitting onto my shoulder and head. I came out of a daze and realized that my feet were partly submerged. The tide was coming in, not going out.
I laughed out loud. It was one of the best drawing times I had in a while.
I picked away at the black lines in the background with a 01 Micron pen over a week or so on my lunch breaks. I could have used a brush or brush pen, but sometimes it feels good just to make little lines and get lost in a drawing. Afterwards, I did a scan and some quick and dirty Photoshop colors. This was the end of it... 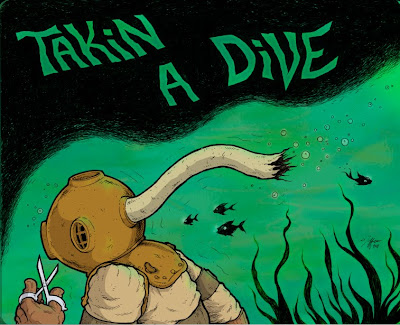 I hope I have more awesome drawing mornings like this in the near future.
Posted by Jeffro at 7:18 PM No comments: 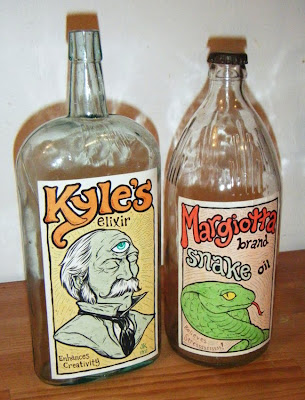 My buddy Kyle Margiotta bought these old bottles from a roadside yard sale a while back. For his birthday, his lady commissioned me to do handmade labels for them (much like the bottles from the World's Fair show last year). The fake elixirs the labels advertised were suggested by Kyle himself.

Since Kyle is such an amazing artist and friend, I am honored that my work will be kept in his personal collection.
Posted by Jeffro at 11:12 AM 8 comments:

The Age of Reptiles show (curated by Anthony Pedro) closes tonight. If you haven't been out to see it yet, please get there. A whole bunch of PCS members and Autumn Society members have some really decent work in the show paying tribute to what Dan Rather called "History's Greatest Generation" - the Dinosaurs!

Here is my contribution to the show: 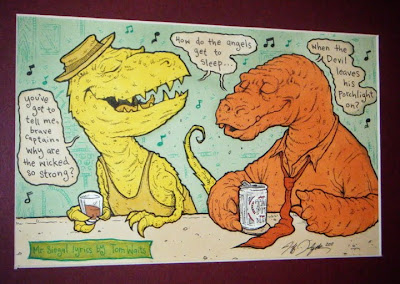 "No Extinction" by Jeffro Kilpatrick

For more information and to watch a video of the show's opening, please visit the Autumn Society's site by clicking HERE.
Posted by Jeffro at 11:10 AM No comments:

As stated here back in September, I have been drawing the spot illustrations for Advance News Magazine’s “Historic Trauma” articles. These articles run in several medical magazines and seem to focus mainly on cases of famous people’s deaths. It seems there are usually some kind of conclusive statements that express how the person’s life could have been saved if they were alive today or if their ailments were treated differently.

The editors have me work in with old-tymie sepia tones and antique cross-hatching and brush work. It’s always a challenge when doing portrait work to somehow make it your own, especially when you are looking at someone else’s photo(s) reference. After all, photography is an art form, and you never want to completely rip off another artist.

The Apollo 1 Astronauts (Command Pilot Virgil "Gus" Grissom, Pilot Roger B. Chaffee, and Senior Pilot Edward H. White) who died during a pre-launch test for the Apollo 1 mission at the Kennedy Space Center.

And Charles Dickens (my favorite of the bunch) 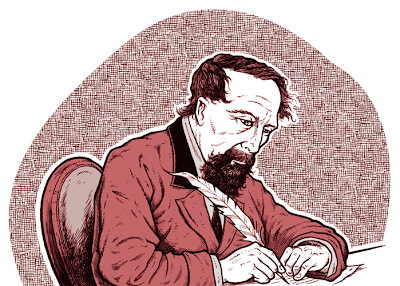